HOW TO WORK PLC ?

A PLC works by continually scanning a program. We can think of this scan cycle as consisting of 3 important steps. There are typically more than 3 but we can focus on the important parts and not worry about the others. Typically the others are checking the system and updating the current internal counter and timer values,

1.First the PLC takes a look at each input to determine if it is on or off. In other words, is the sensor connected to the first input on? How about the second input? How about the third… It records this data into its memory to be used during the next step.

2.Next the PLC executes your program one instruction at a time. Maybe your program said that if the first input was on then it should turn on the first output. 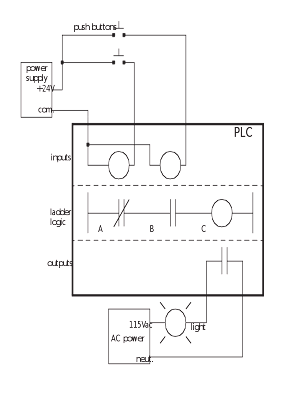 Since it already knows which inputs are on/off from the previous step it will be able to decide whether the first output should be turned on based on the state of the first input. It will store the execution results for use later during the next step.

After start sw is pressed timer will be enabled and after 15 sec it will match the preset value. The start sw will be pressed momentarily and that’s why a latch is used for both motor to keep them running. but what happens for timer? will it stop at the false condition of rung3 or it will only stop at preset value no matter what happens in rung3?

Share on FacebookShare on TwitterShare on LinkedinShare on PinterestShare on Xing